This document intends to serve as both an instruction manual for the web application, as well as a description of the functionality and service it provides. The numerous screenshots included should both help in understanding how to use it, as well as quickly show everything it does.

There are a few different permission levels that will be referenced throughout this document:

The lowest is that of an unauthenticated user, who can only browse released callbacks and cast lists.

Next, actors can sign for their shows via a link they receive via email, or if they create a password they can log in and edit their profile.

“PDSM”s are anyone who is a staff member of any show. They can use the common casting site for their shows, and also view first-round cast lists.

Regardless of their status as a PDSM, a user can also be a “board member”, part of a group of users, which the “superuser” can add other users to. Board members can use most of the admin site to set up and edit shows, casting release information, and view the status of the above.

The highest, “superuser”, would belong to the President, and possibly one or two other board members. They can do almost anything, including sign onto shows for actors and edit user profiles directly.

The current season, relevant throughout the system, must be manually set and changed by the site superuser.

Setting up a show

A casting-enabled show is simply a show that is linked to a casting-release group, as well as a number of audition slots. As such, the new/edit screen provides a way to select an existing show and existing casting release group, or create new ones via the small green plus buttons. 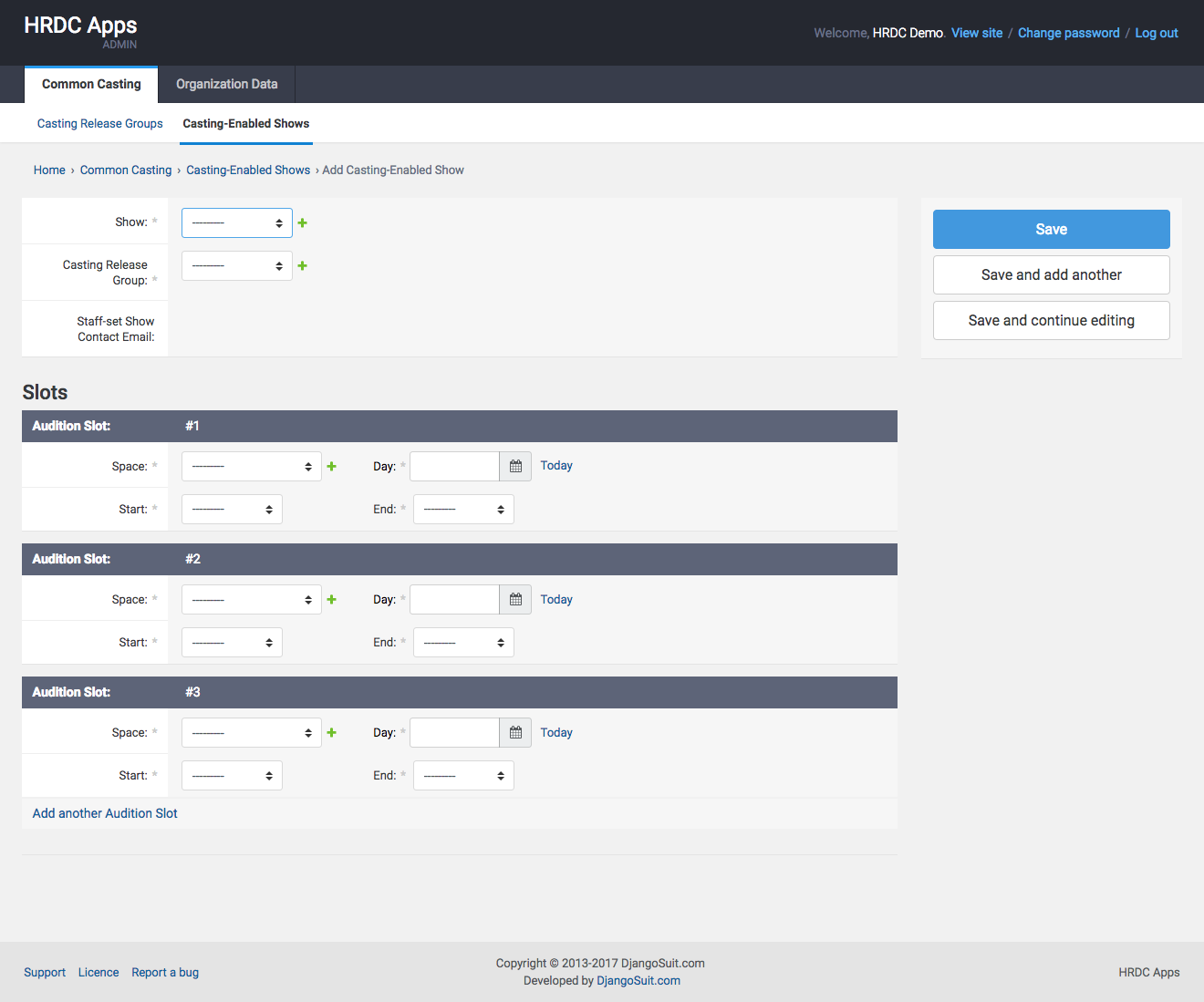 Upon clicking the plus button to create a new show, a window will pop out allowing entry of the show’s title, season, and space. 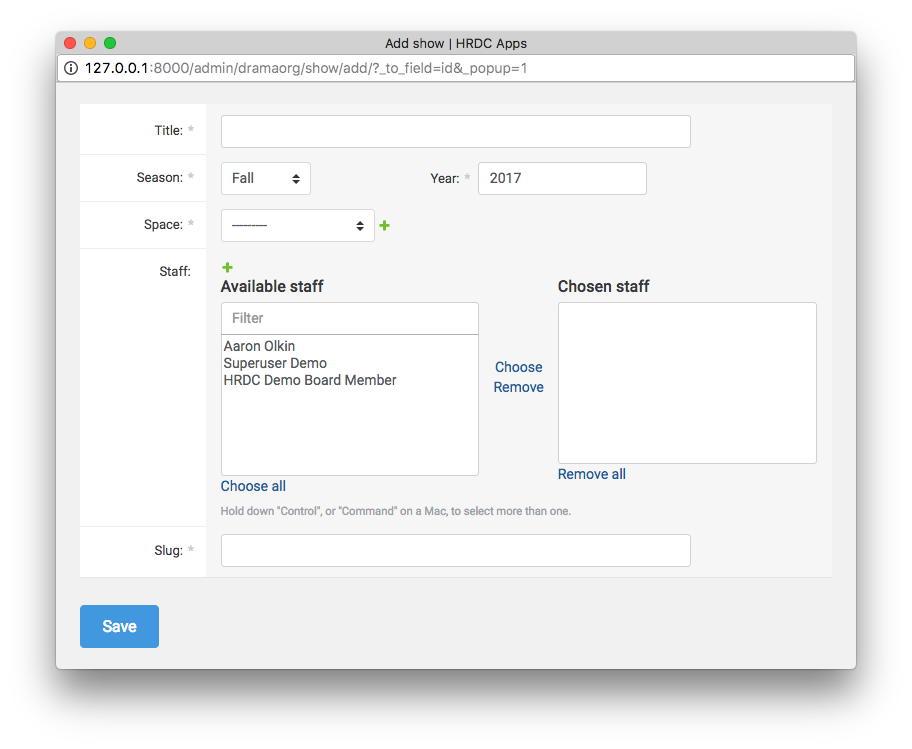 Shows, auditions, etc must all take place in spaces.

New spaces can also be created trivially, at which time they must also be assigned to a new or existing building. At this time, the address data of a building is unused. Disable “include building name” if the name of the space should stand alone. 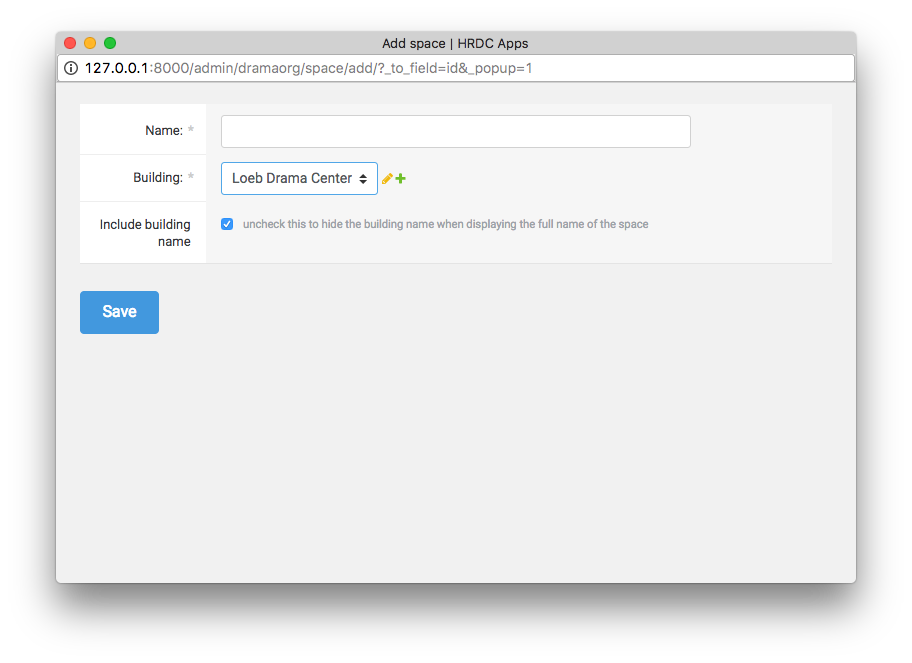 Additionally, one or more staff members must be chosen for the show. If necessary, new ones can be invited by email. Their names will will not show up in the system until they have logged in for the first time and created their profile.

The “slug” field typically does not need to be adjusted manually, unless a show is being set up with the same name as a previous show. (Slugs must be unique across the entire system).

In addition to the Show, a Casting Release Group object must be chosen.

To create a new one, just click the green plus button again. These can be saved immediately, without adding any information, although the information will need to be added later then. For more information, see “Setting up a casting release group”. 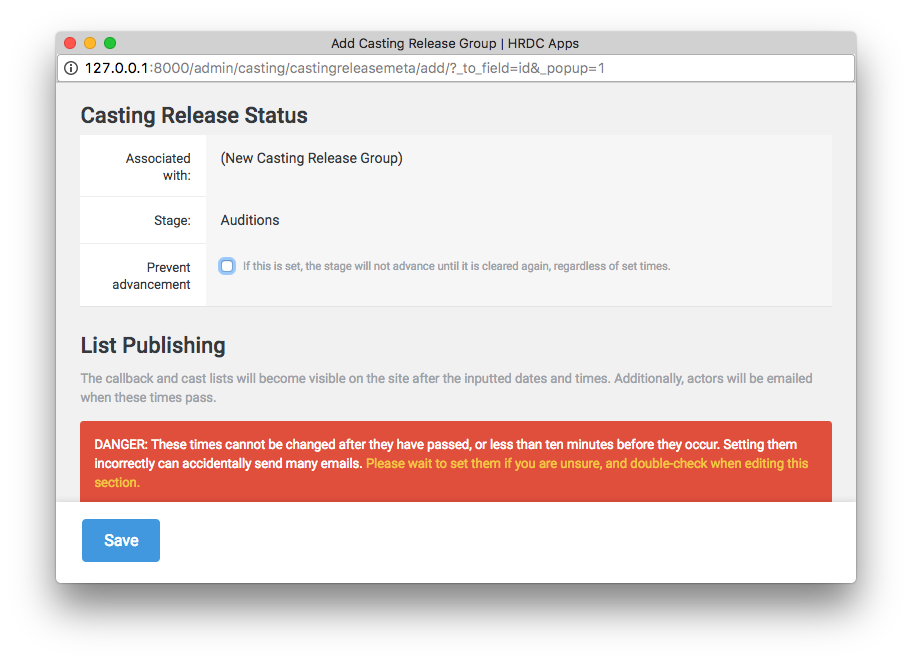 Casting-enabled shows should have a number of audition slots. An audition slot is fairly self-explanatory. The categorization of spaces within buildings is important, because when the system generates the list of shows to sign into in the sign-in form, it is by building.

Setting up a casting release group

A casting release group keeps track of the stage of the casting process, and controls the automatic release and distribution of callback and cast lists.

NOTE: Heed the warnings on the editing page. You must double-check yourself.

Once dates and times are set, the group’s stage will automatically advance at the given time, allowing actors or PDSMs to view additional pages and sending email notifications as appropriate.

WARNING: “second signing opens” will mark all first-cast actors who have not responded as having rejected those roles at the given time. 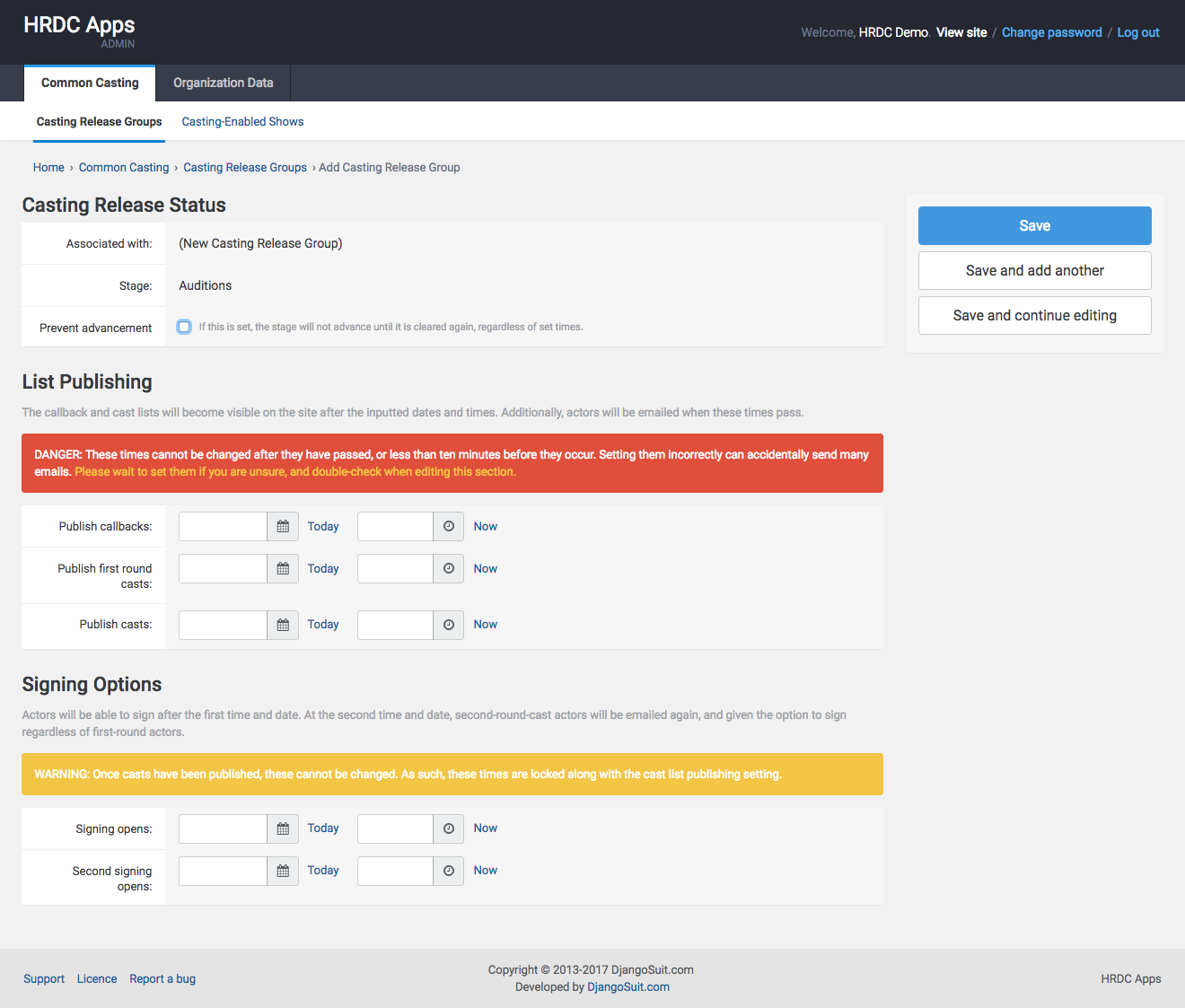 Upon navigating to the common casting home page, PDSMs are presented with a list of shows they are working on. They can work on individual aspects of casting a given show by clicking the links in the sidebar.

Additionally, for PDSMs or Board Members, if audition slots are currently happening, a list of buildings will be displayed. 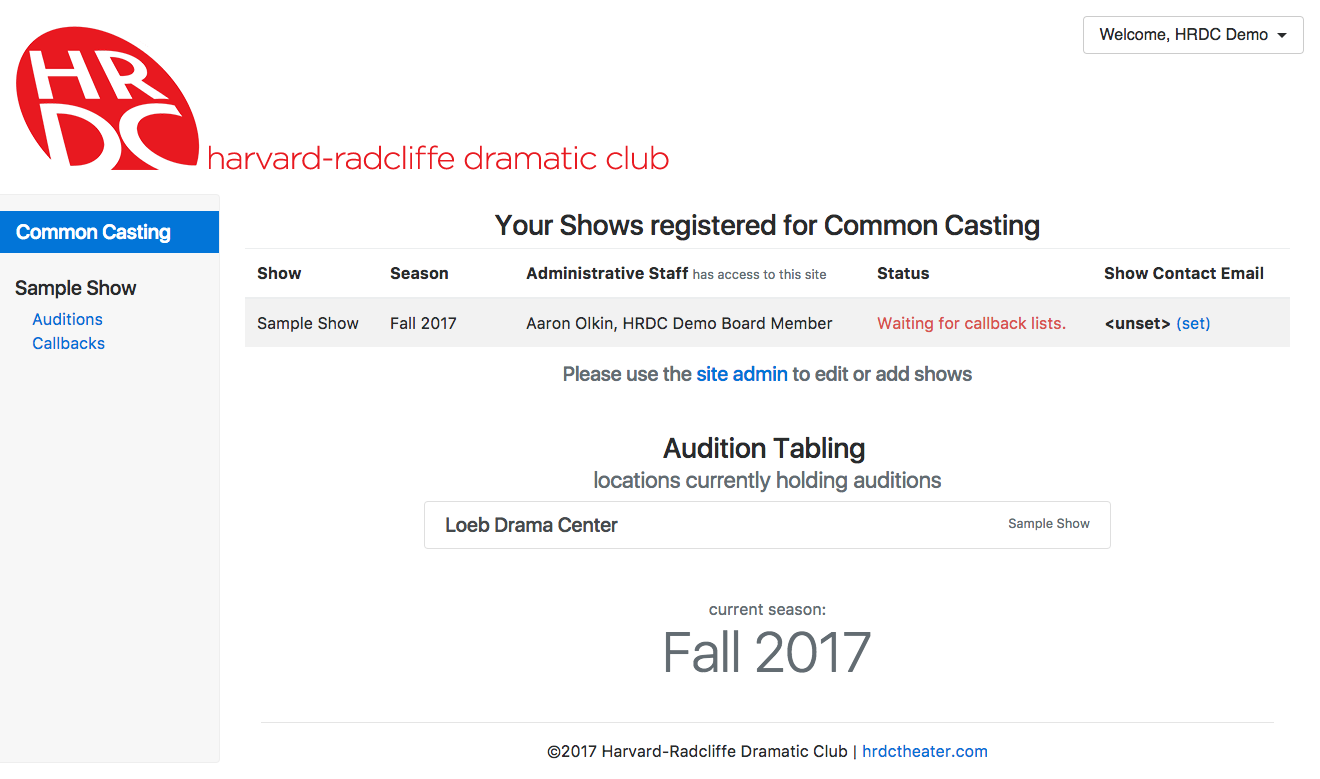 Upon navigating to the tabling page for a given building, the “Actor Sign-In Form” may be opened. It can be presented to actors directly, for them to sign in, or not.

The sign-in form first asks actors for their email, as well as which shows they are interested in auditioning for. If they have signed in before, the system recognizes their email address and immediately signs them in. If not, they are asked to enter their name, phone number, and PGPs, after which they will be signed in. 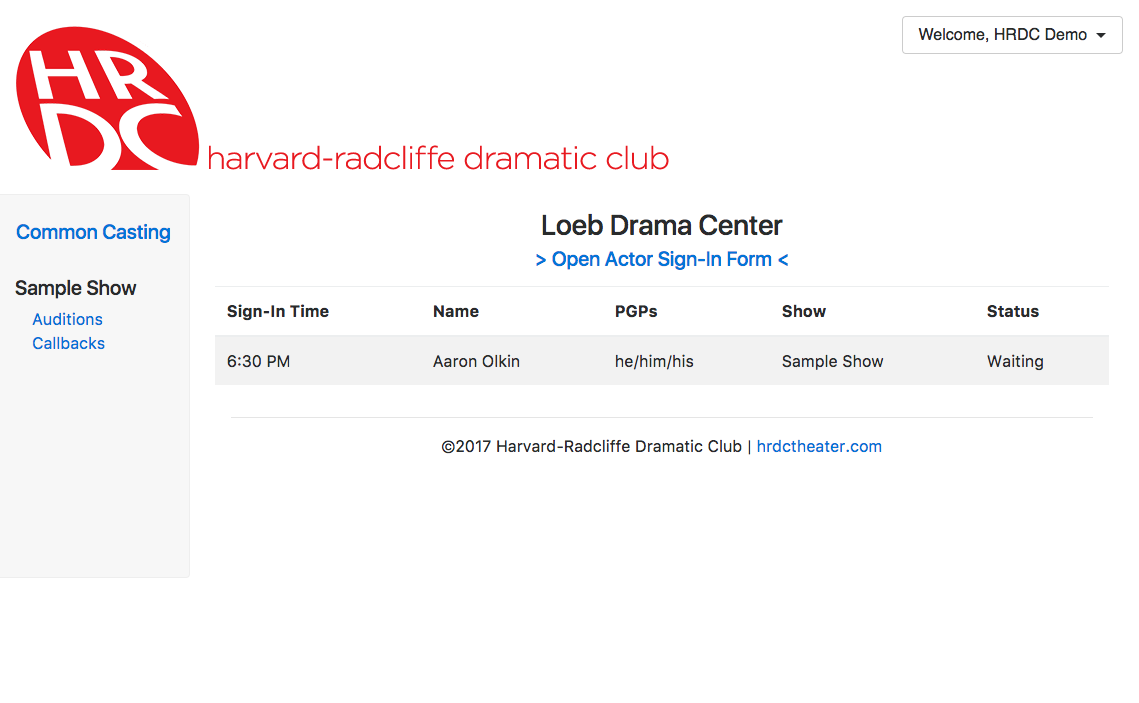 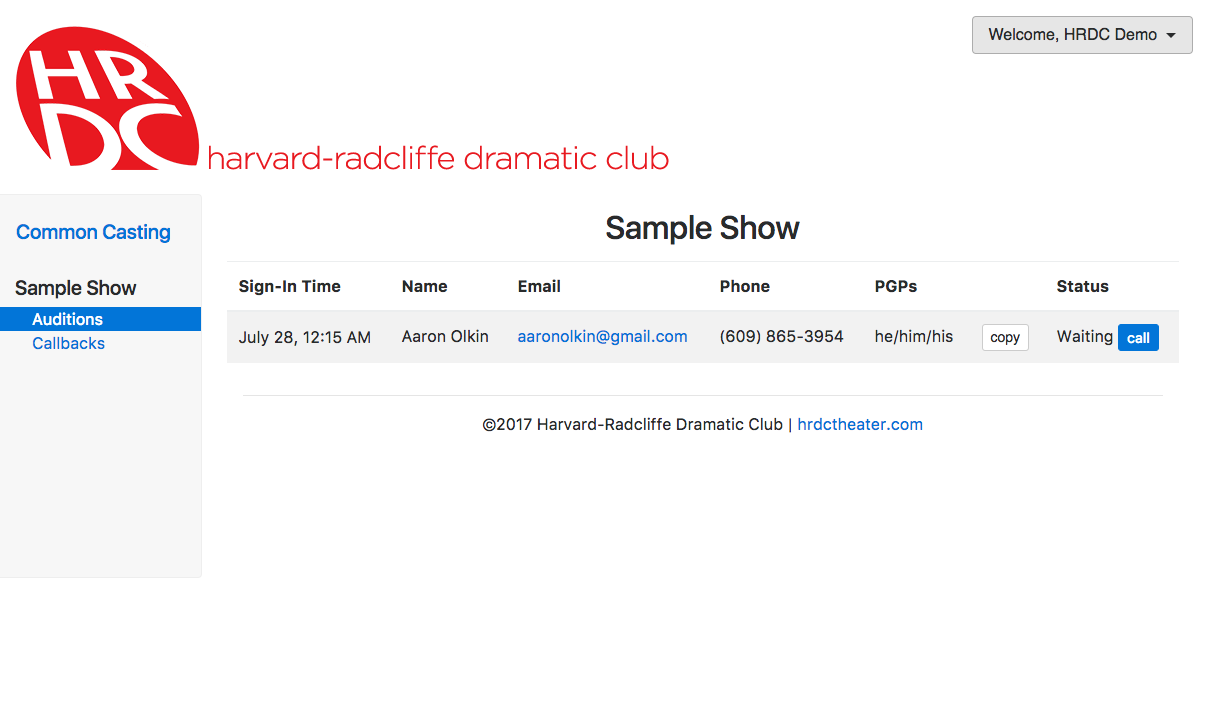 The “copy” button instantly copies the actor’s name, email, phone number, and PGPs to the clipboard, ready to be pasted into a Google Docs or Excel spreadsheet.

The “call” button, when clicked, updates the audition status to “called”. This update will show up instantly for anyone tabling in that building, as well as any other PDSMs viewing the show’s auditions page. After “call”-ing an actor, the button will change to “done”, allowing a PDSM to mark the actor as having auditioned (an update that again, will be instantly reflected everywhere).

Occasionally, PDSMs will forget to mark an audition as done. This can cause some problems, and therefore, any auditions still in progress after their slot ends will automatically be marked as done. If this doesn’t happen, casting administrators can use the Audition admin to mark auditions as done via the multi-select action dropdown.

Additionally, if a show wishes to callback or cast an actor who did not show up to auditions, there are two ways to enter them into the system. One is to create a fake slot for the current time and sign them in via the normal process. Alternatively, the Audition admin can be used to create a fake Audition for them. When doing so, select the right show and actor, select any space, and make sure to check “Sign in complete”. This will cause the given actor to show up in the show’s list.

All information inputted on this page is instantly and automatically saved, and will also be synced to anyone else who is editing at the same time (much like Google Docs). 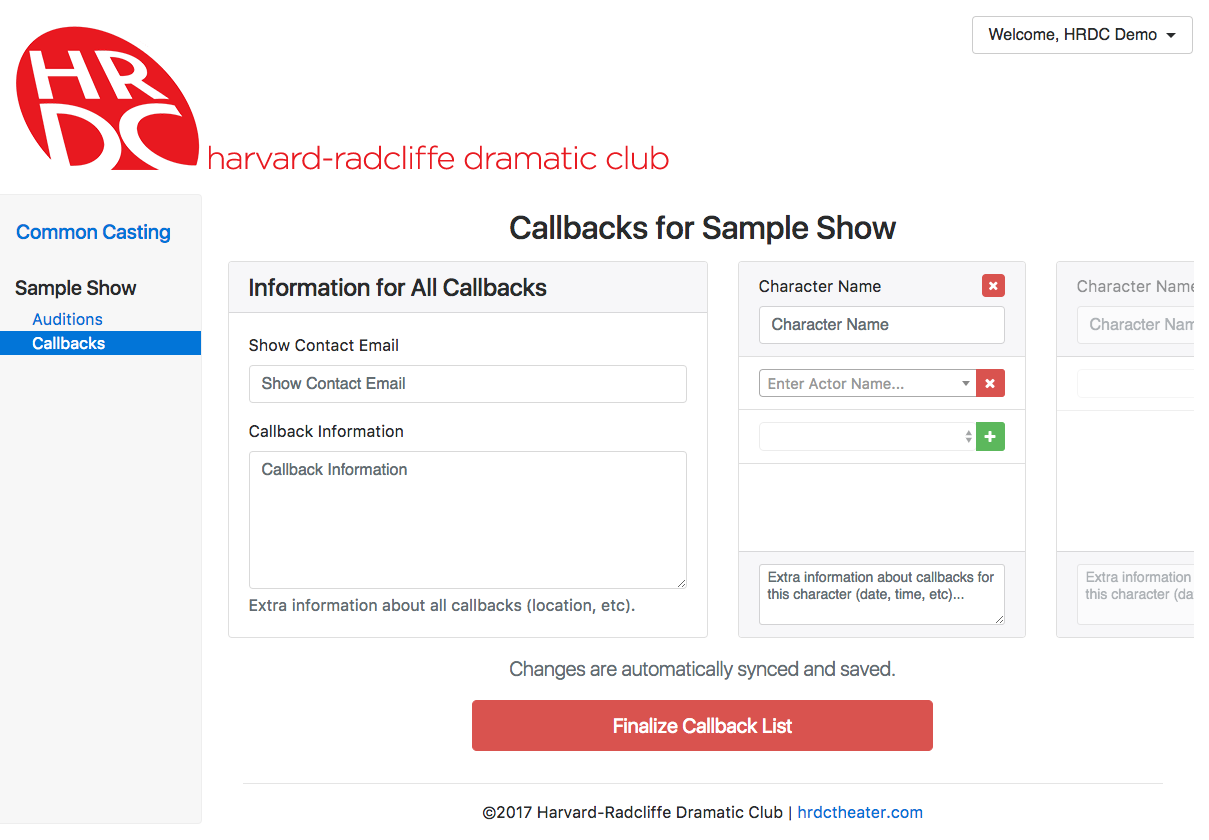 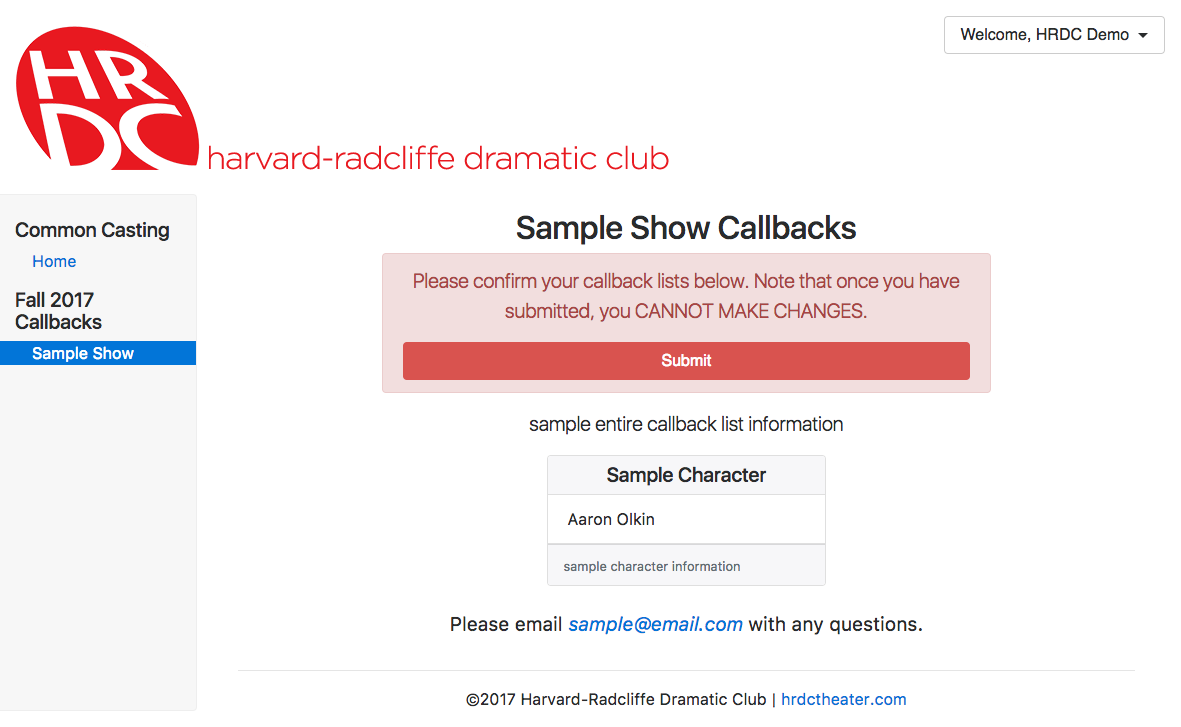 In the admin interface, board members can then see which shows have and have not submitted their callback lists. 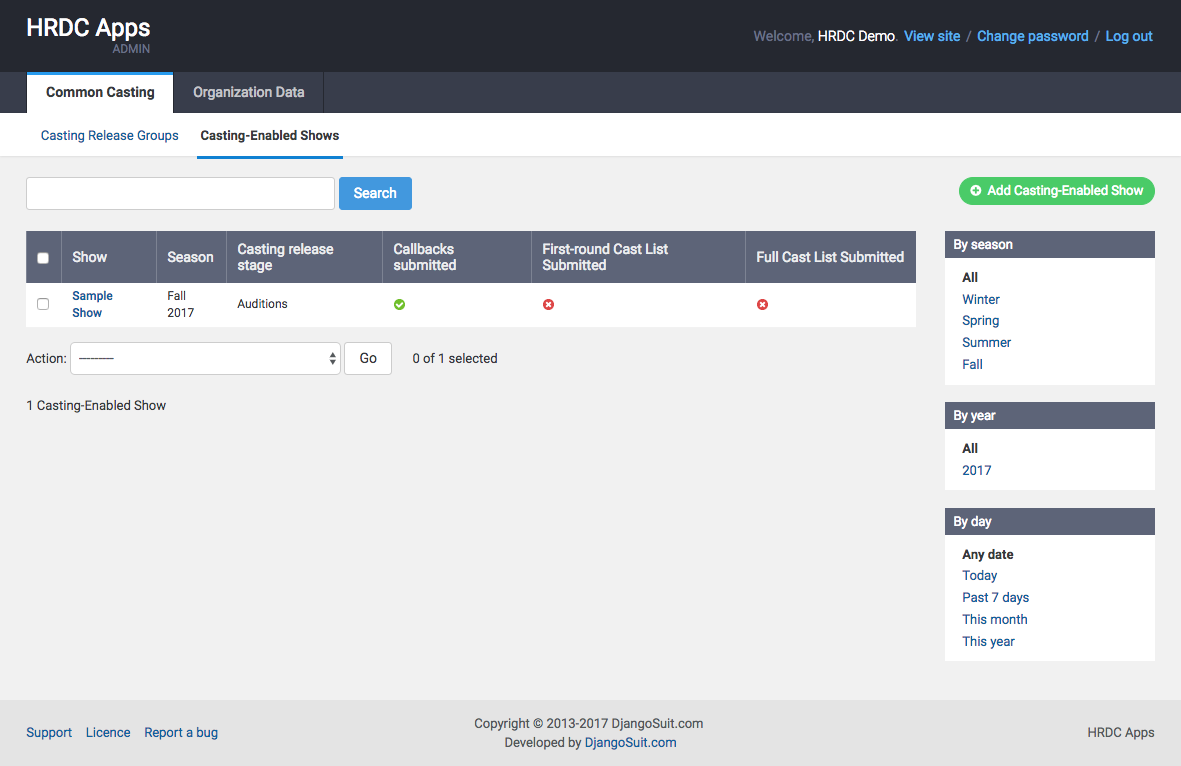 When the previously-set time passes, all submitted callback lists will be published (in fact, if a callback list has not been submitted yet, the publishing will wait for it). 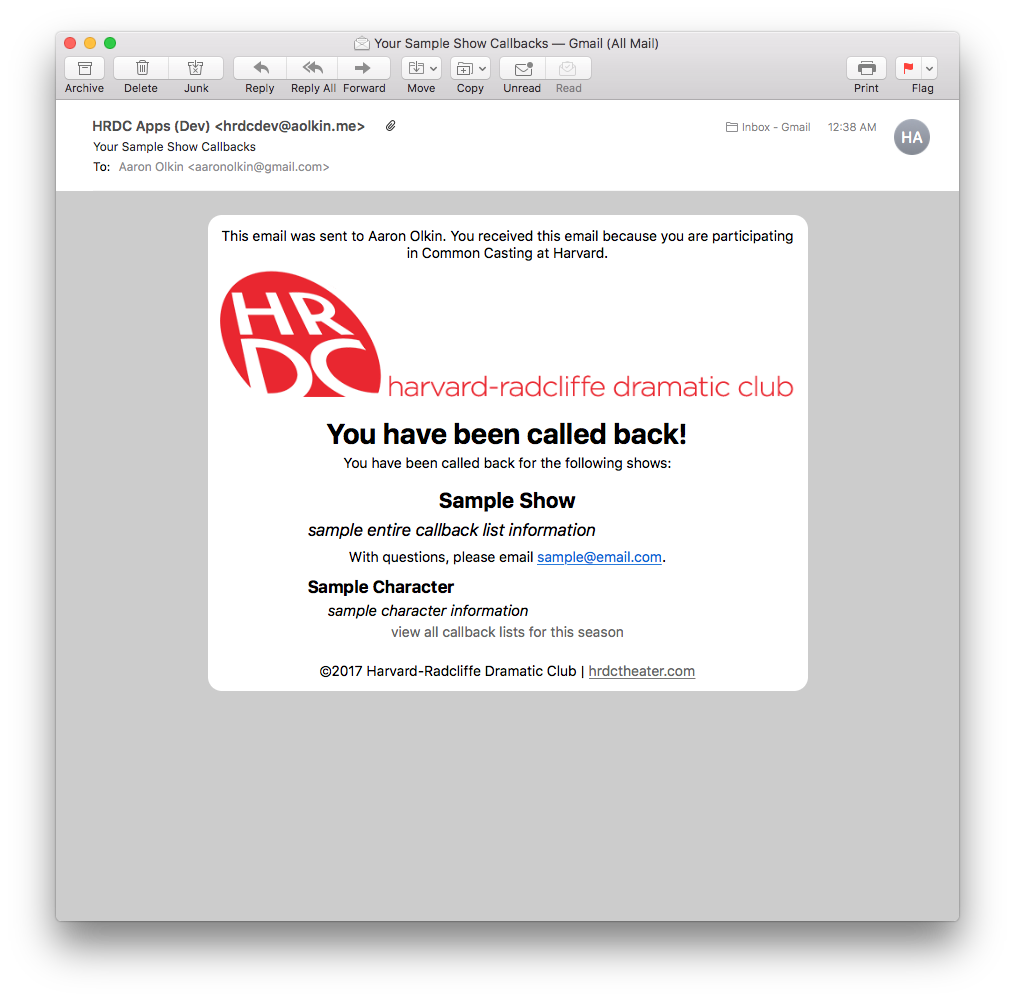 Callback release will first automatically email every actor who was called back with a list of all of their callbacks, then it will update the casting release group’s stage. When this is done, callback lists will be visible to anyone, without logging in. 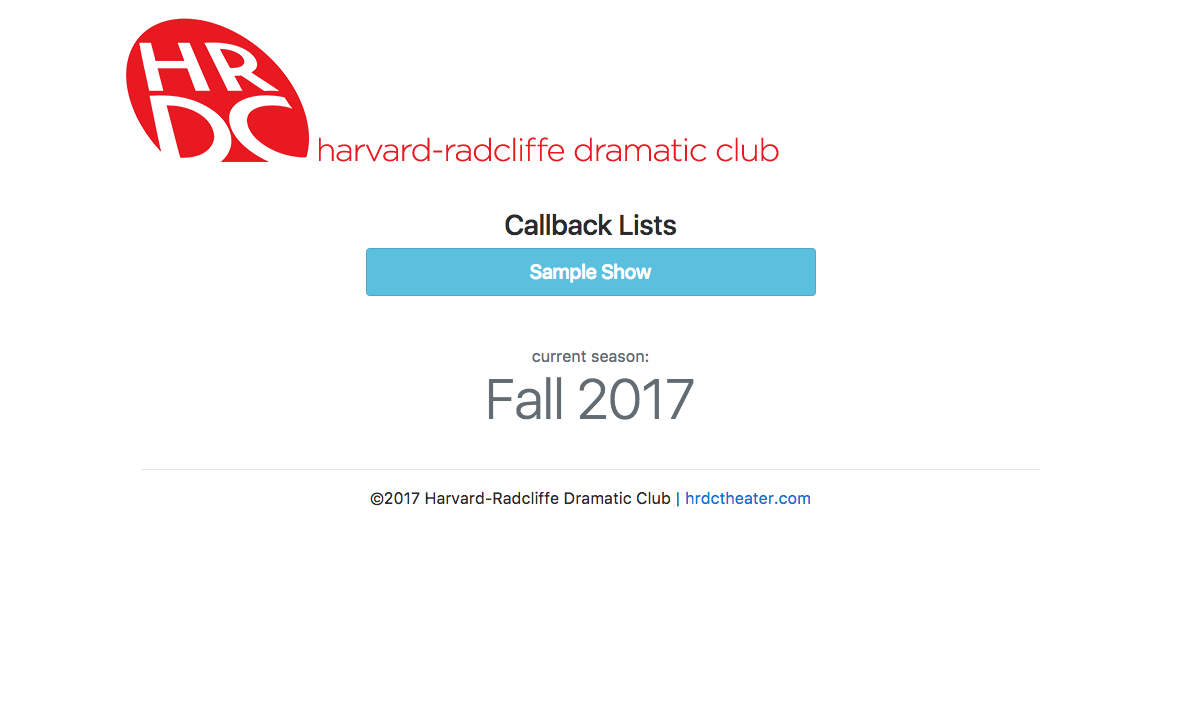 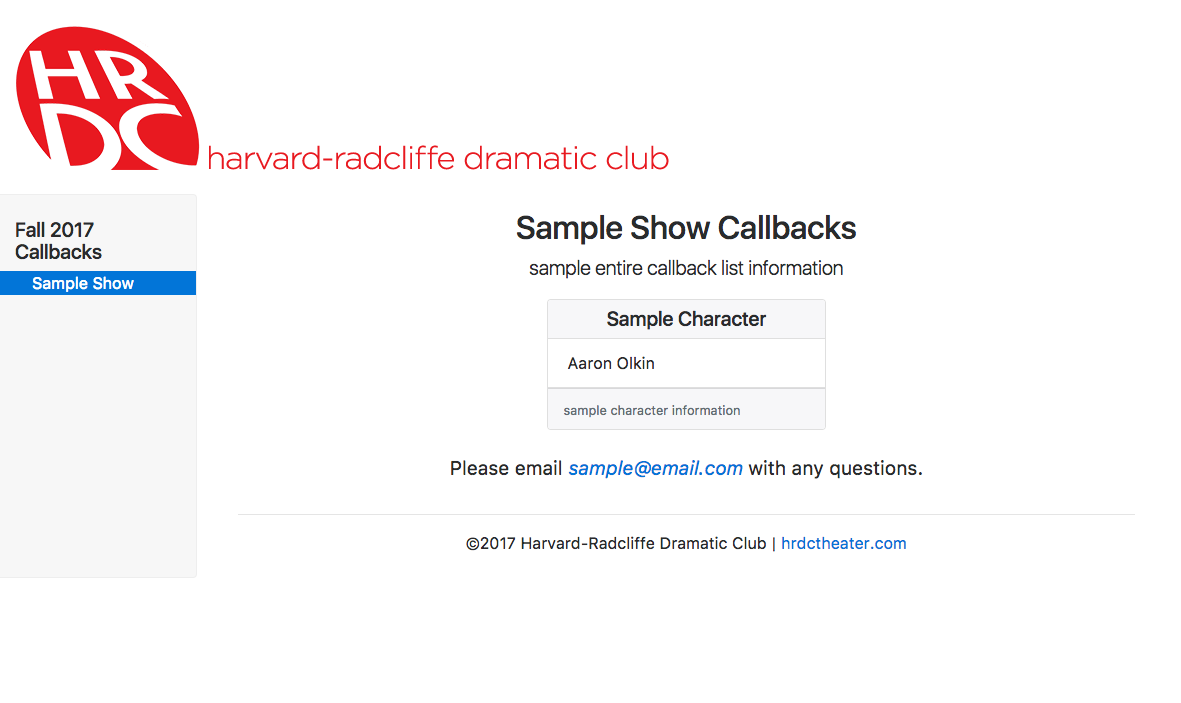 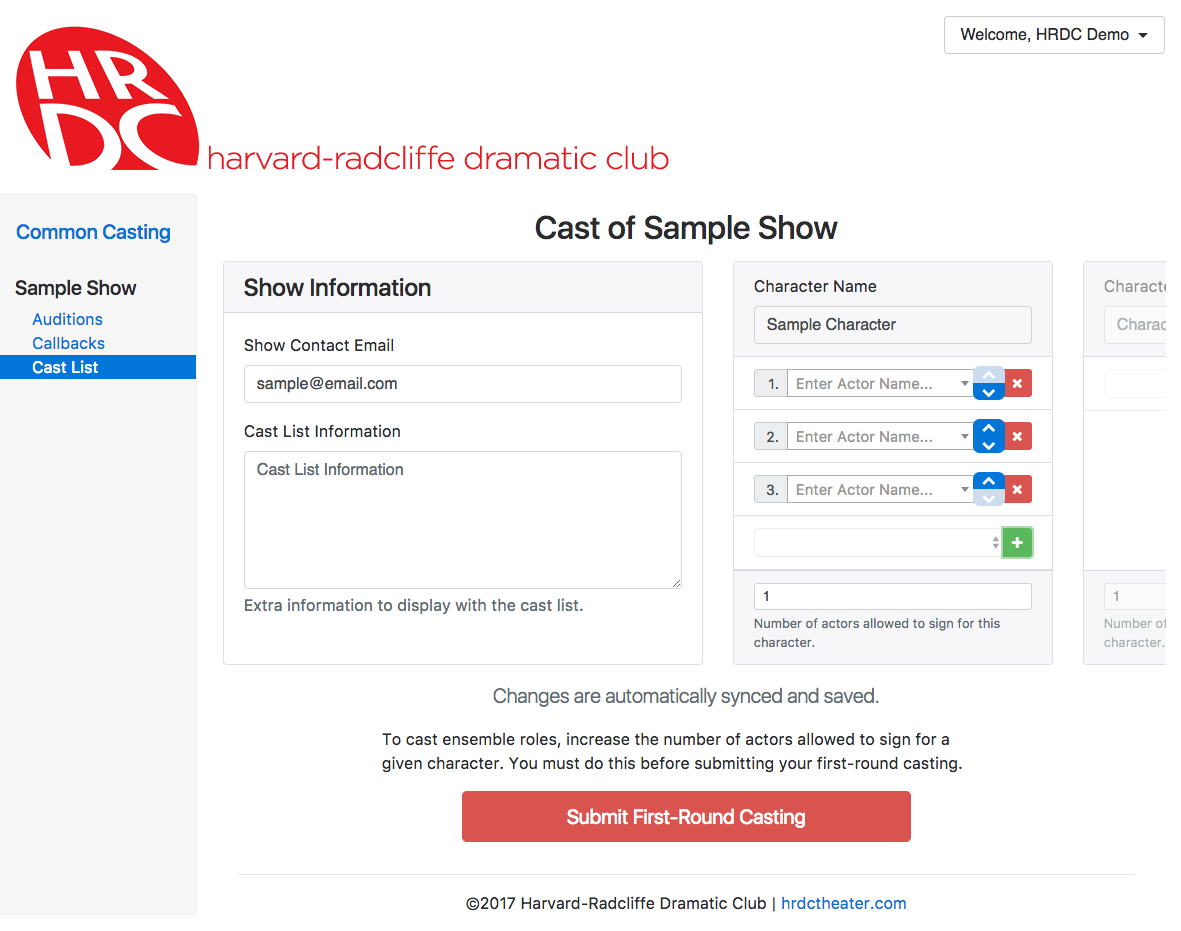 However, instead of allowing additional information to be listed with each character, PDSMs can change the number of actors allowed to sign. This is designed for casting ensemble roles; if it is increased, the first n actors will be allowed to sign.

NOTE: While additional characters can be added, characters for which callbacks were listed cannot be removed or edited, and must have actors cast as them.

If a show would like to allow a role to be signed for in addition to other roles in that same show, they should create the role as normal. Then, before cast lists are released, an administrator can use the Character admin page to check “Allow multiple signatures” for that character. Actors will then be able to sign for the given role in addition to other roles in that show.

The submission and release procedure for cast lists functions very similarly to callbacks, except that there are two stages. The first time through the submission procedure, only the first-choice actors will be listed. 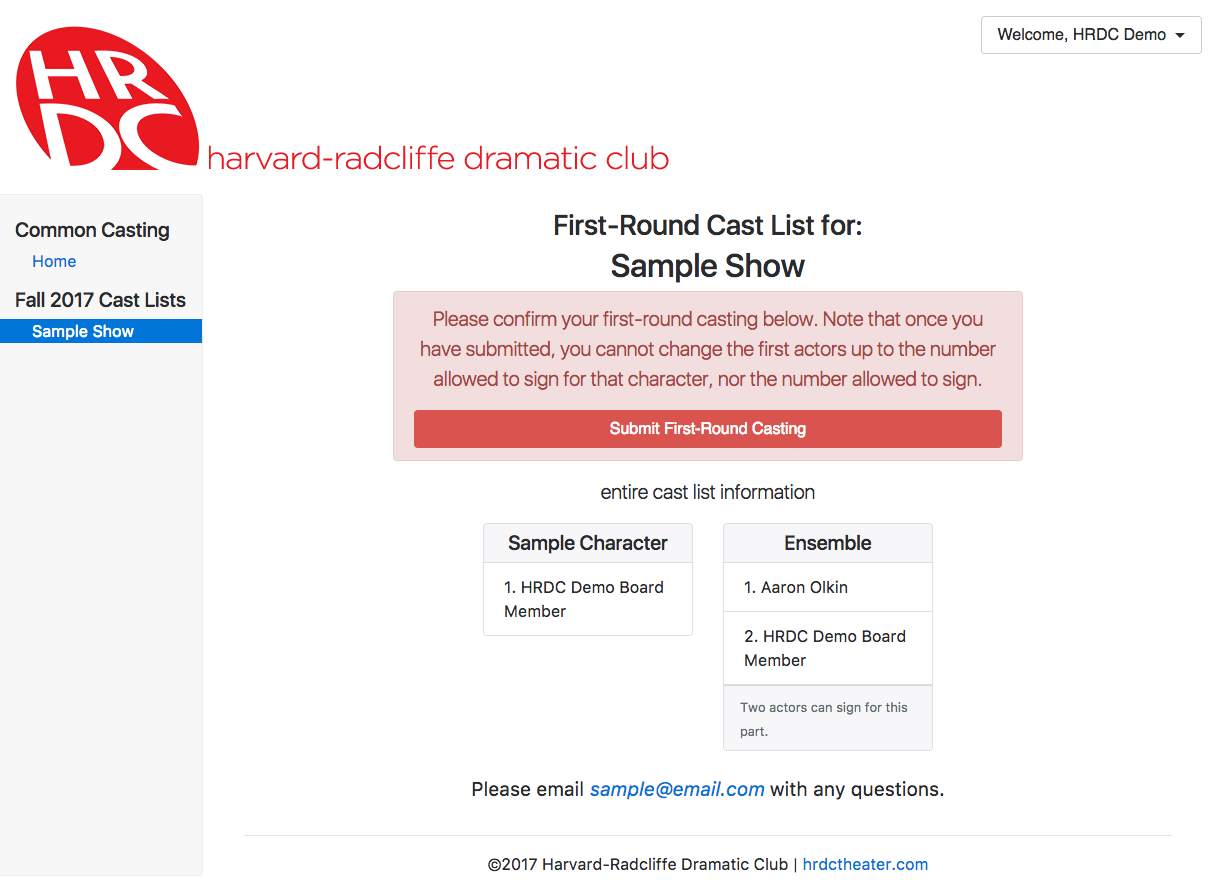 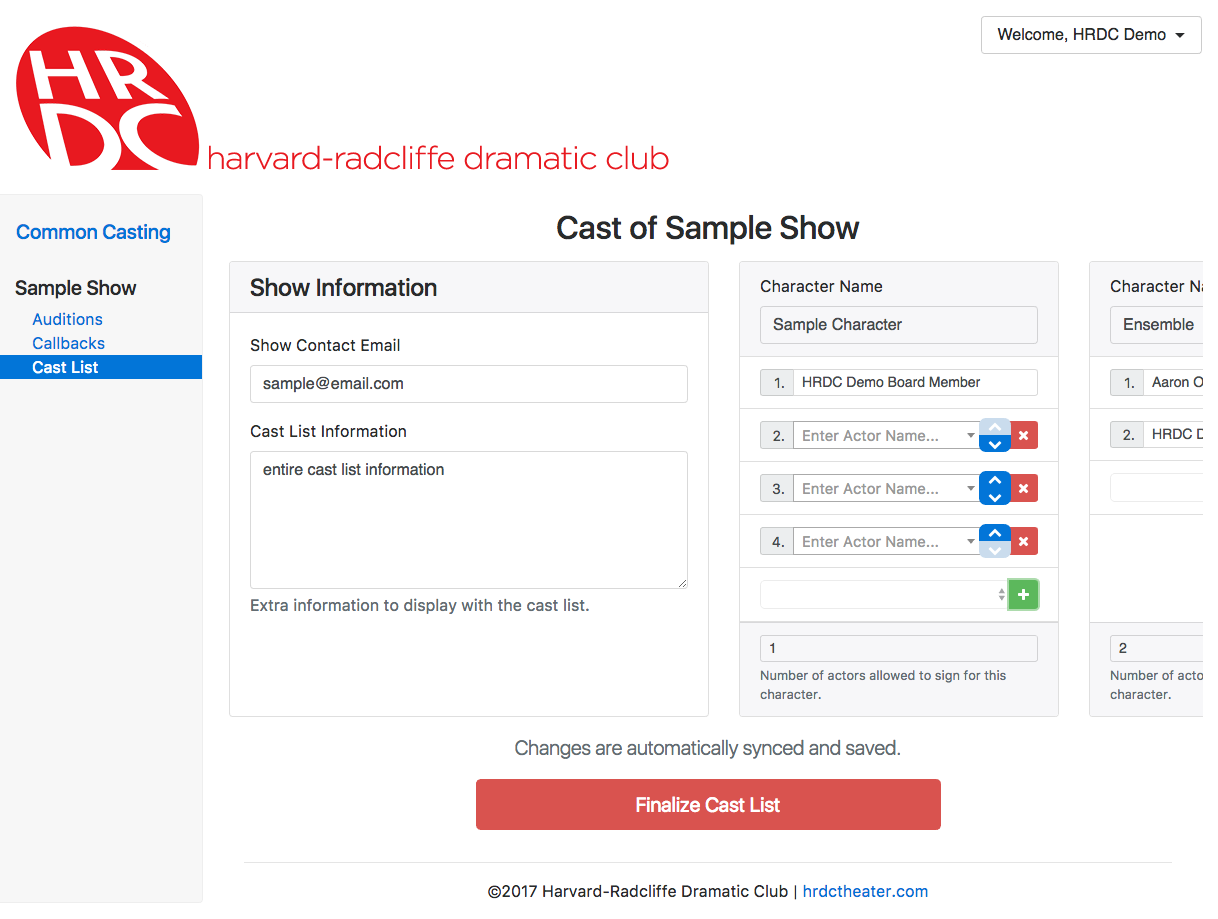 While the admin interface does not provide a way to directly fix mistakes in callback or cast lists, it does allow undoing the team’s submission of said list, allowing the team to go back in and fix the mistake themselves. To do so, simply go to the show in the Common Casting admin and unchecked the appropriate box under “Submitted Lists”. The team will then be able to continue editing and submit again when they have fixed their mistake. 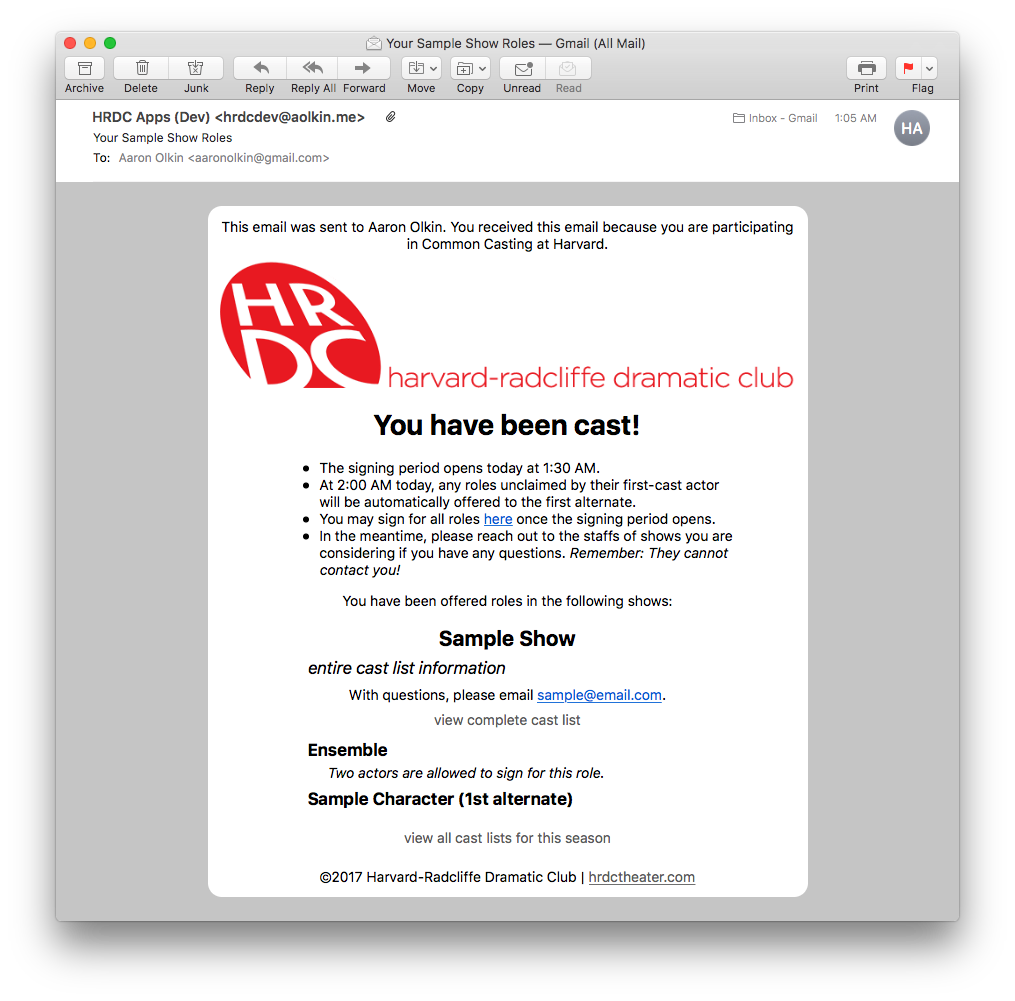 Once published, the cast lists also display icons indicating whether actors have signed for their roles. (Note: these do not update live, the page must be refreshed.) 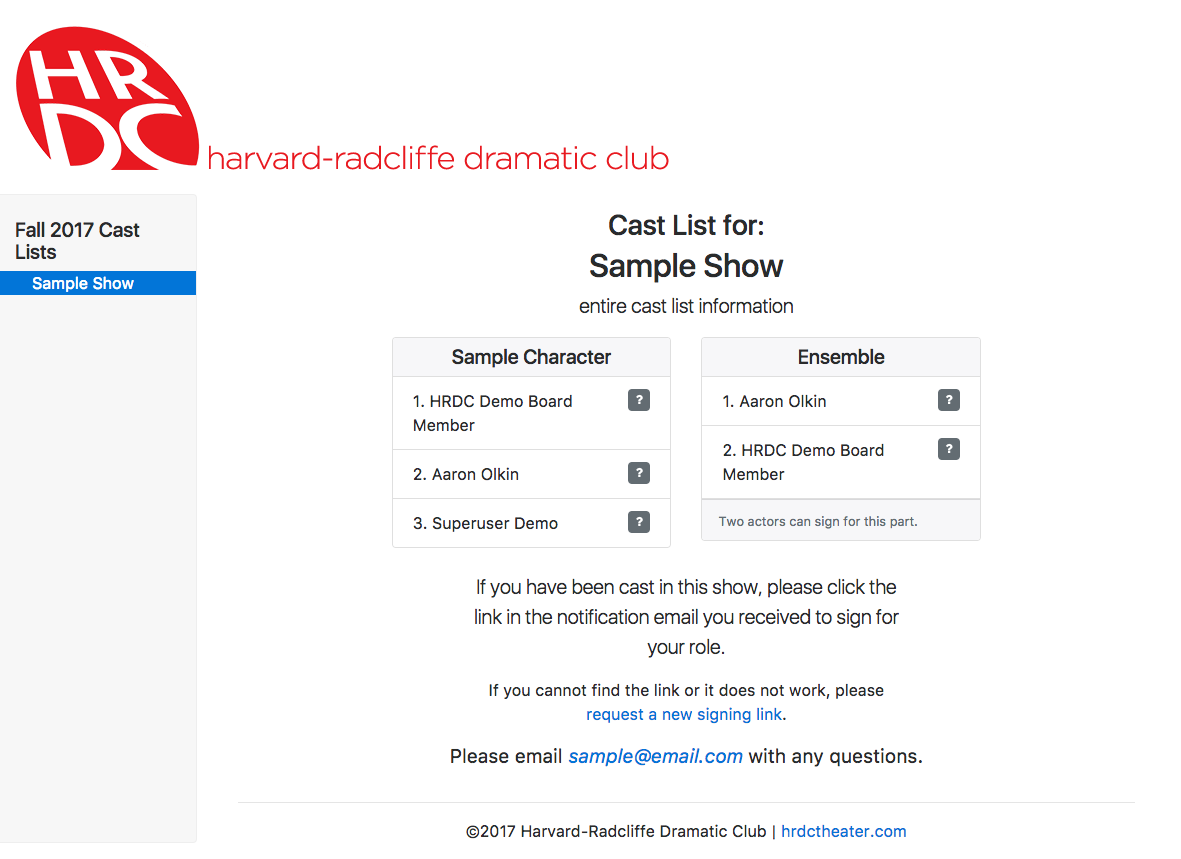 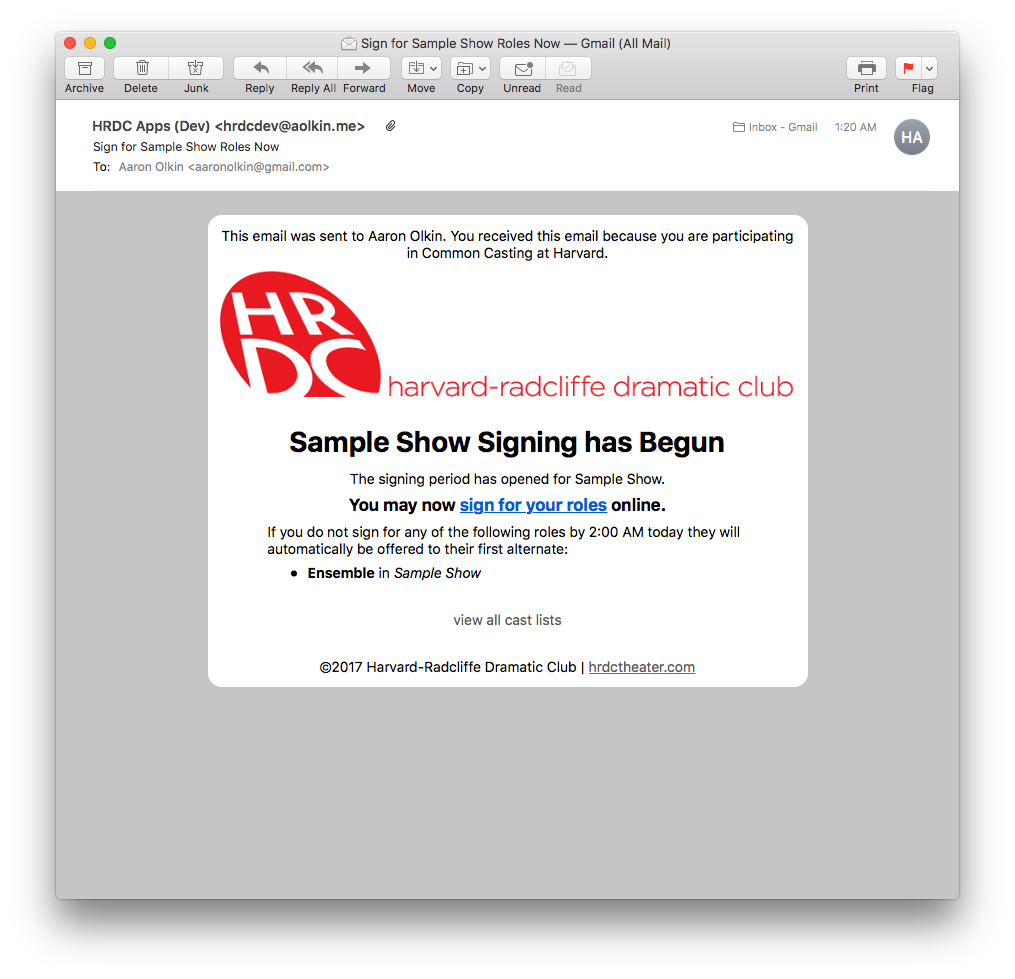 To sign, actors must click the link emailed to him. Unless they have set a password, that is the only way for them to identify themselves to the system and ensure the signing process is secure. After clicking that link, actors simply select whether they are accepting or rejecting each role offered to them. They can submit with only some choices made, and come back to others later, but cannot change decisions once submitted.

Note: if an actor has trouble signing, the superuser can edit and set signing responses in the admin interface. This overrides everything else, so be careful. 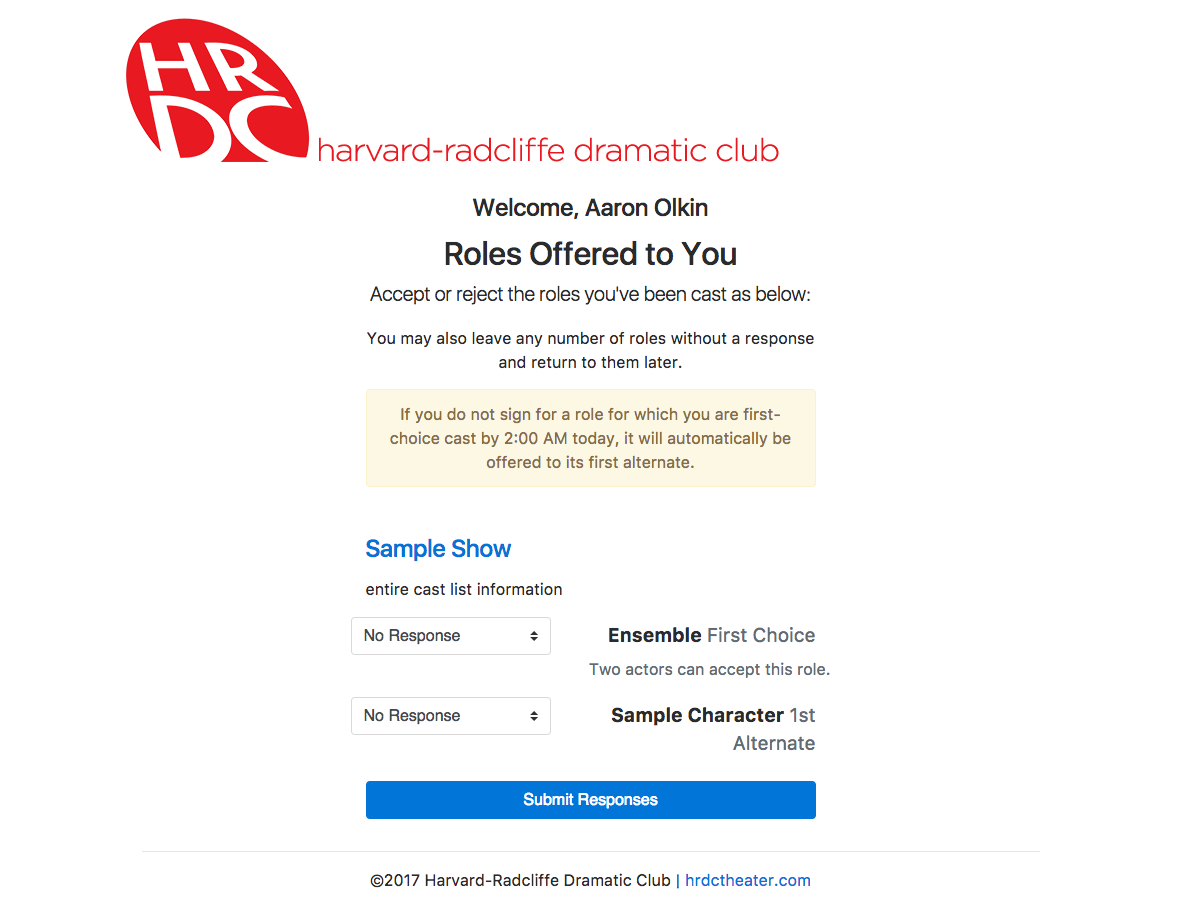 If a role is no longer available to an actor, because an earlier choice has accepted it, that will be visible when they go to sign and they will no longer be able to sign for that role.

On the other hand, when an actor rejects a role for which they are the current first-choice, the next actor in line receives a notification email reminding them that it is now available for them to claim. 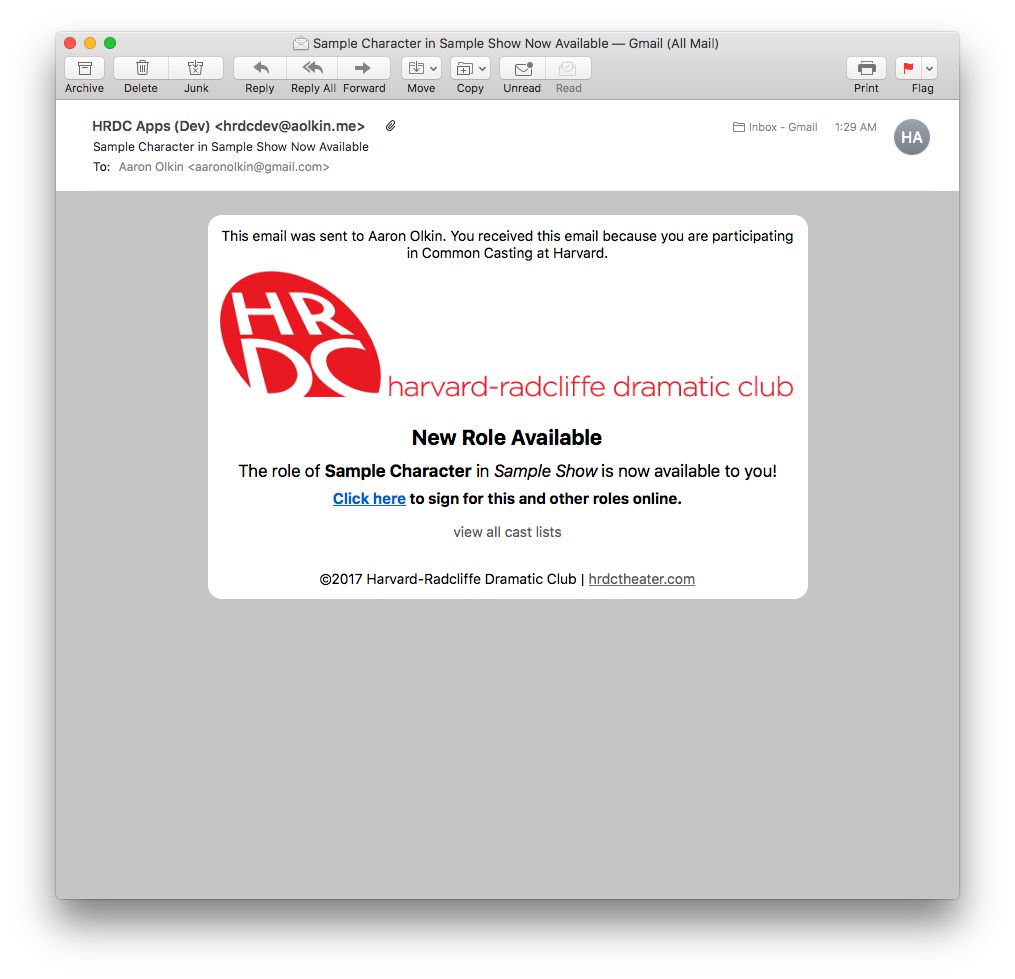 As actors sign on to shows, the icons on the cast list will update to reflect their signing. 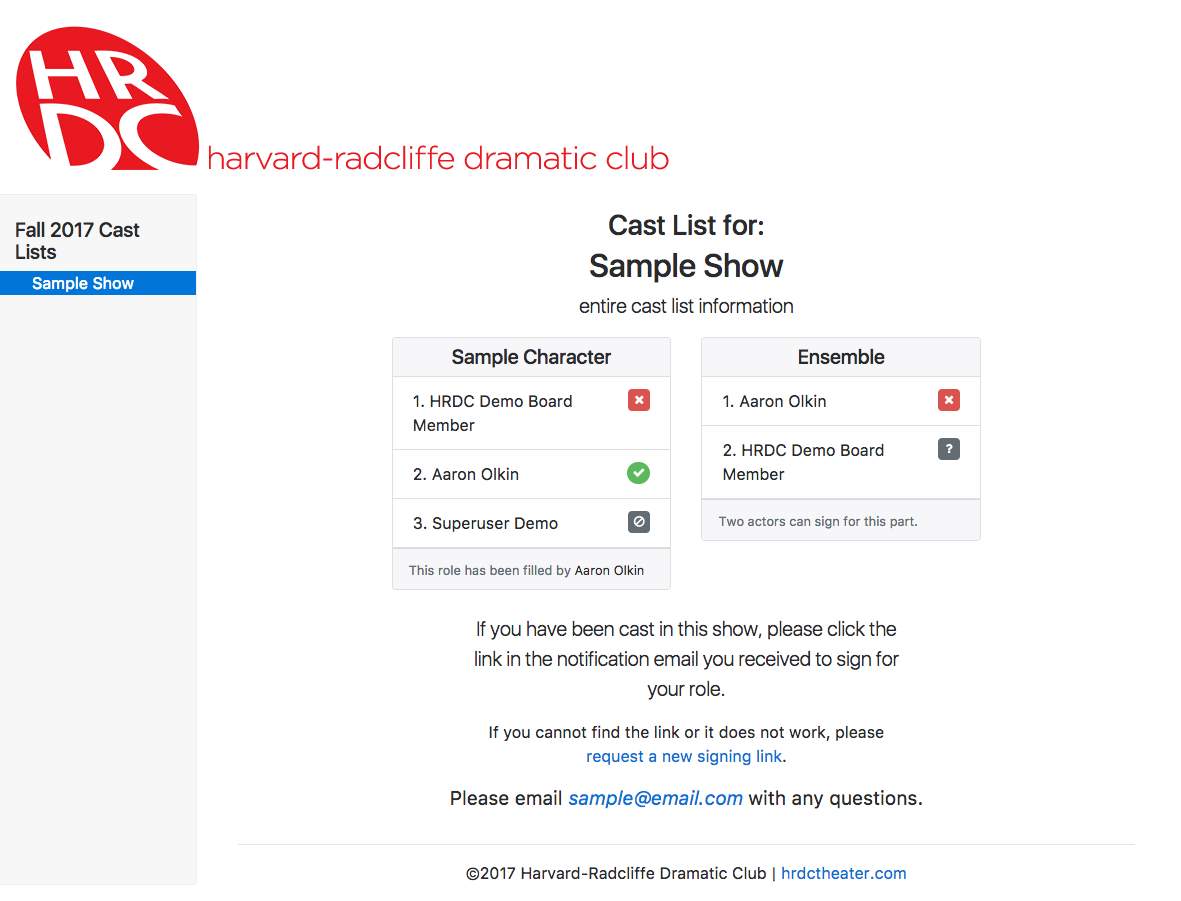 To temporarily disable signing, check the “Disable signing” checkbox for the Casting Release Group. This will prevent actors from submitting their acceptances or rejections of roles they have been cast in until unchecked again.

When the second signing time passes, all first-choice roles which have not been accepted are automatically marked as having been rejected, notifying the next in line and allowing them to sign.